To my long un-updated blog,

This will be a landmark post, ladies and gentlemen!
That's right.
I am finally writing an article in which my subject will be A FIGMA! :O

Today I will be sprucing up Figma Araragi Koyomi, because he's a bit unappealing, and has been ever since I bought him.
Here he is: 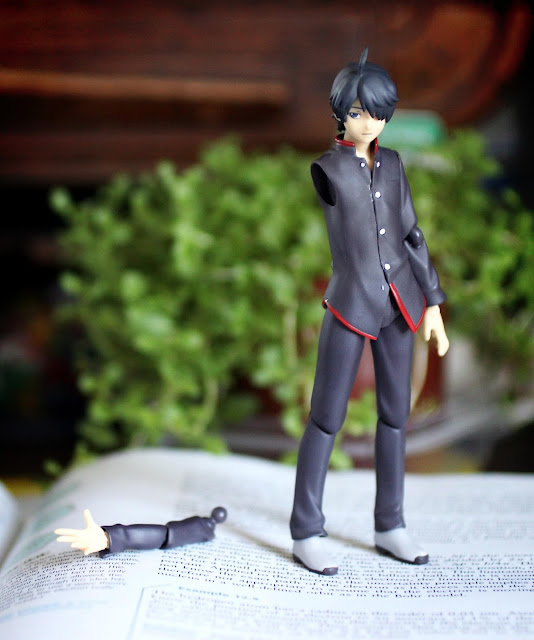 Okay, so there are a couple of things you might notice right away.

Araragi had three main problems and because of them I had never really liked him, but it's really not his fault and all he ever needed was a bit of TLC.

Since I fixed these minor issues I've started to really like him! He's actually really cool!
So... The Actual Problems:
1. His paintwork is really dull and unappealing.
It looked cool on the prototype, but my figure looks kind of flat (it's a bit hard to tell from the picture, but he was really boring compared to my other Figmas).

3. There's a slight chance that you've picked up on this already, but his arm keeps falling off.

1. The Dull Paintwork.
Many Figmas seem to suffer from a phenomenon I'm going to call "Factory Dust". It's not very noticeable, but they have it straight out of the box and it really dulls the paint, especially dark colours.
I think it's probably caused by a coating of fine dust or powder, but luckily, it's still easy to get rid of.
Just rinse the figure under running water. No soap required.
That's it. No tricks (apart from keeping the plug in so that small parts don't go down the drain if they accidentally fall off). Plain, cold, running water straight from the tap.
It works on Nendoroids too, and doubtless many other types of figures which just don't seem as bright as they should.
If your new figure looks a little dull, try giving it a cold bath!
(Somehow it took me about nine months to think of this...)

Araragi's colouring came up really nicely after cleaning. It's actually really surprising how much better he looks. I didn't realise he had that much "Factory Dust" on him!
.... I have no idea what the stuff actually is, though... I'm guessing it's something to do with the packaging process, but I will probably never know.

OK, next!
2. The Ugly Smear of Glue.
First up, a photo:
Damn! So ugly!
Like so many of its smudgy conspecifics, this blemish is small but super visible and super annoying! (... it may even be super glue........... heh.)
I don't know how many figures come out of their shiny new boxes with horrible glue smears on them, but I figured I'd write this up in case anybody else is having this kind of problem.

To remove the ugly smear, I used a really big sewing needle to chip away at the glue:
I say the glue came off smoothly, but there were still a few little bits left over which wouldn't come off with the needle.
Because I am a very obsessional person, I carefully filed these off with a fine grade emery board type file. It's meant for making PVC jewellery and I think it's officially a "polishing" file.
Seriously, some of these files are so fine that you can file the surface off paint without scraping through to whatever's underneath. It's fishsticking amazing!
I highly recommend getting some because they're also great for removing paint smudges (and they're cheap. I got a pack of three for ≈$6.00).
~ yeah, you know I didn't really mean "fishsticking".
Right. The glue is all fixed! On to the next problem...

3. His arm keeps falling off.
Yes... um... it does keep falling off.
Ever since I got him, it's been fairly loose. It stays on okay most of the time, but when I try to pose him it pops off with very little provocation. The socket in his shoulder just seems a bit too shallow.
To be honest, I haven't managed to fix it yet. I tried a few things and none of them worked, but if I manage to repair this loose joint, I'll write a post about it.

For now, Araragi's arm will have to stay loose, but he still looks WAY better than he did when I got him!
... and his arm isn't too bad anyway... 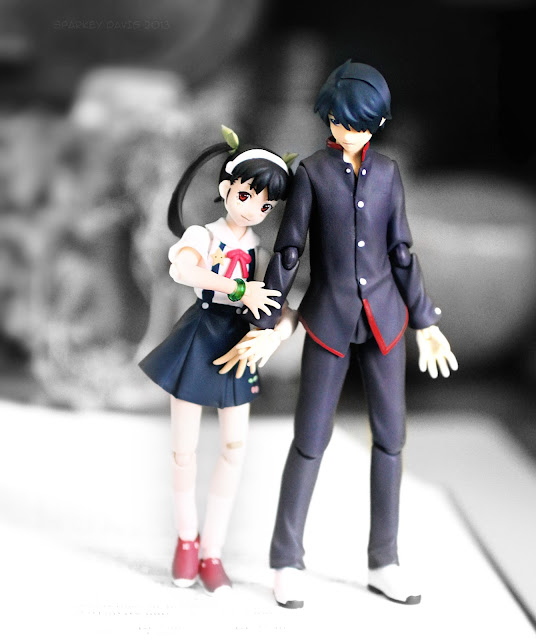 Anyway, I hope this post was at least a little bit helpful, even if I didn't end up fixing Araragi's arm!

As always, best of luck with your figures!
Cheers!
Sparkey

Who is this person, anyway?

Sparkey Davis
I'm a person who is generally interested in everything (i.e. a massive nerd). I write, I draw, I fix things, I build stuff and I like solving problems. One day I want to try hang gliding. I can also play a hornpipe on the accordion.