Greetings!
So I've been looking at my stats recently, and I am getting a lot of refers from people looking for info on fixing broken Figmas.
I haven't actually managed to break any of my Figmas yet, but they're not so different in the way they work to a lot of other figures, so here I will be explaining two methods of repairing figures which are applicable to almost all PVC toys (including Figmas!) and can probably fix over 90% of breaks!

OK, first up, I'll explain the difference between a low stress area and a high stress area:

Low stress areas are not put under much pressure. They're usually not moving parts and if they are, then they're only moved minimally.
If you want to fix one of these, read Method No.1.

High stress areas are the things which break most often. They're things like shoulders, knees, necks, elbows, hips, etc, which have quite a lot of stress put on them when the figure is being played with.
If you want to fix one of these, read Method No.2.

Method No.1 – Supa Glue
For low stress repairs.
This is a really good (and DUH obvious) method for visible areas which are not part of a moving joint. It would be great for non-posable scale figures, snapped accessories (like swords or firearms) or other small things.

The example figure I will be repairing is Nendoroid Millhiore F. Biscotti!
Isn't she pretty? 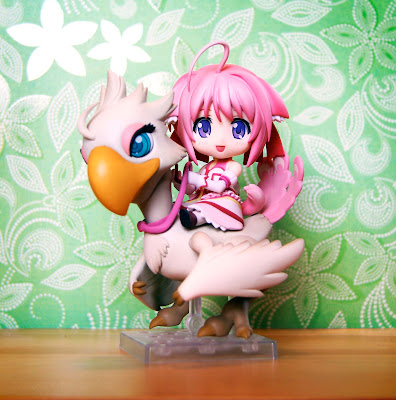 Unfortunately, just after I got her, she fell of her horse... er... bird... er... mount and her ahoge broke where it attaches to her head!


Ahoge means "foolish hair" in Japanese, and, if you didn't know already, that's the silly bit of hair sticking out at the top of her head.

In Nendoroids, large ahoge like this are actually posable! You can rotate it from side to side so it can point in any direction (I love Nendoroids)!
I would not recommend trying to fix anything which will be put under higher stress than this ahoge with glue alone. I'm careful when I'm posing it now, but it's been a few months and it hasn't broken yet.
I didn't take any pictures of it when it was broken because it was before I started this blog, but here's a shot of how it looks now:
Anyway, after freaking out and practically crying (she is nothing without her ahoge! NOTHING, I tell you!) I glued it back on with supa glue.

This is very easy.
Just put glue on the broken surface and then push the two parts together until the glue grabs. This usually takes about 30 seconds or so.
If it doesn't grab the first time, it probably means you used too much or too little glue. Don't be discouraged if you have to try this a few times with different amounts of glue... oh yeah, and don't get the glue on your skin because it sticks to people :O
Note: Supa glue only works on really clean fractures, so if the plastic around your break is a little mushy, you might want to try a different adhesive. For info on choosing the right one for the job, have a look at my glue info page.
As you can see, the supa glue worked a treat on Princess Biscotti. Her ahoge is even still posable!

Method No.2 – Drilling & Pinning
This is my personal favourite method for fixing high stress fractures: this includes action figure joints! YES, THAT MEANS FIGMAS!
The equipment required is not necessarily the kind of stuff that everybody has lying in their desk drawers, but if you're a figure collector, these tools are an invaluable resource and well worth the small amount of money you will pay for them.
All of these things are easily obtainable from hardware stores, hobby shops and online!

This is the method I used to fix RAH Roy Mustang's broken head, which you can read about here!
For now, however, the figure I will be demonstrating on is Pure neemo Kanata Sorami! 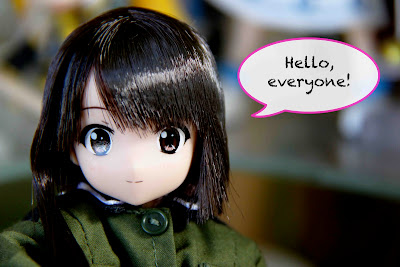 Poor Kanata. Her knee joint popped out and so I took off her boots and trousers to fix it, but in doing so, I broke her foot off! *facepalm*
Even though she can still stand with the foot off (I just jam her leg into her boot) I wanted to fix it, because she's just not the same with an amputation.
Here's the busted foot and the ankle it's busted off: 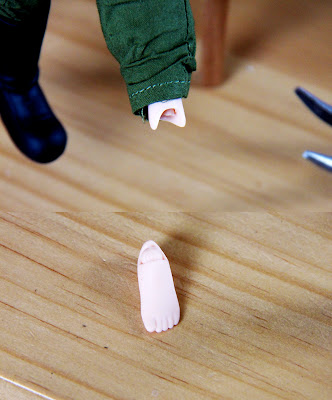 The foot snapped off at the ankle joint.

Something like this is way too small and gets put under way too much strain to be fixable with glue alone, so I'm going to drill a hole in each side of the joint and insert a bit of wire before gluing.
Here is Kanata with the tools I will be using:
To start, drill a small hole into the fractured surface on each of the ankle and the foot. The holes should be roughly 3-4 millimetres deep (for my empirical friends, that's about 1/8") and the drill bit you use should be the same width as your wire, or as close as possible. My closest drill bit is 1.3mm and that works fine with the 1.25mm wire.
Notice, in the above picture, that there is a centreline in the joint. This is not a mould line. It is the juncture of two separate pieces of plastic. It is the movement of the two pieces against each other which makes the joint functional.
Also notice how the hole I drilled does not go directly through the centreline, but instead to one side of it, through the original broken surface.
If you glue a wire through more than one of these pieces of plastic then the joint will be frozen and will not move anymore!
It's exactly the same deal with Nendoroid and Figma joints.
In fact, here's an old Nendoroid joint which has been taken apart, so you can get an idea of how it works:
Here is the ankle after drilling:
Notice how the hole is slightly to one side in the above photograph. This is to correspond with the fact that the hole in the foot is also off-centre. If you can't get this quite right, it's no big deal, but it's better this way.
... Actually, to be honest, I was hoping to pull the peg out of the leg part before drilling to make it less awkward to get to, but the pliers didn't grip properly and I just ended up mashing the peg :/

Of course, this method is not limited to this kind of joint. You can use it to fix all sorts of things, like this fracture, in the straight shaft attaching RAH Roy Mustang's neck to his body:
Anyway...
Now that the holes have been drilled, it's time to cut a piece of wire to fit them.
The length of the wire should be equal to the combined depths of the drilled holes.
For example, if I drilled a hole 3mm deep in the ankle and 4mm deep in the foot, then the wire will have to be 7mm long so the whole joint fits together nice and snugly.
It is advisable to cut your wire to the right length before gluing anything. Believe me, it's just easier that way.

Once you've cut your wire, glue it into one part of the drilled joint and let it set for a few hours.
Now that the glue is at least partially set, apply more glue and glue the whole joint together... with glue (I really love glue, don't you?).
Now wait for the glue to dry. I don't know how long this will take. It depends on the type of glue, the temperature, atmospheric conditions, alignment of the planets, etc...
Make an educated guess based on the instructions on the packet and add a few hours. That's my advice.
...
...
...
OK, so the glue is now set and... did it work?
Yep.

Well, that's all from me!
I hope this helps some of you guys with your Figma-related problems!
Cheers! Sparkey.

Who is this person, anyway?

Sparkey Davis
I'm a person who is generally interested in everything (i.e. a massive nerd). I write, I draw, I fix things, I build stuff and I like solving problems. One day I want to try hang gliding. I can also play a hornpipe on the accordion.